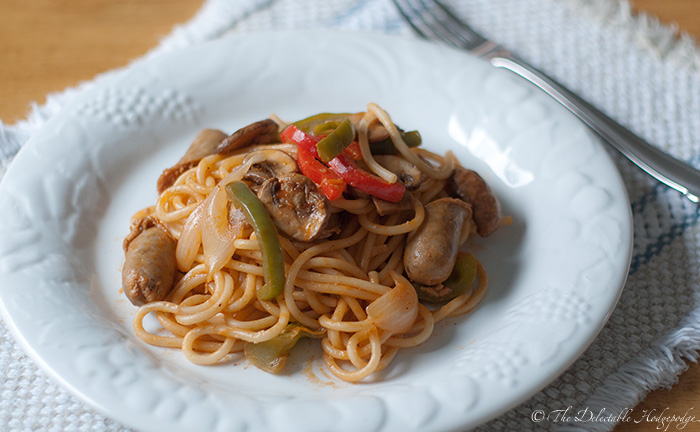 It may be called “Napolitan” in Japan, but this spaghetti has nothing to do with Naples — it’s a Japanese original. The ketchup-based sauce might look a little odd, but with the cream and Worcester it has an unusual, slightly sweet, and very mild flavor — may be worth trying if you’re out of jarred spaghetti sauce. To my Italian-American taste buds lots of parmesan cheese is a must at the table.

That’s “pan” as in the Japanese word for bread (comes from Portuguese), not the kind you cook in. The Japanese have a tendency to stuff just about any entree you can think of into a hot dog bun and call it “somethingorother pan,” and this recipe is one you can find almost anywhere in Japan. Just take the finished spaghetti, stuff it into a hot dog bun or similar piece of bread, dump some parmesan cheese on top (and maybe a little extra ketchup if you’re so inclined), and eat it like a little hoagie.